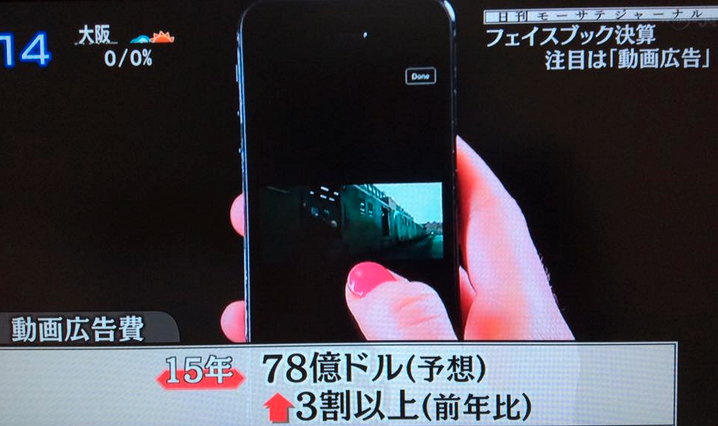 January 26, 2015 6:42 pm
Facebook tries to get personal with video ads
Hannah Kuchler in San Francisco
A man walks past a logo created from pictures of Facebook users worldwide in the company’s Data Center©Getty
Imagine if your television knew exactly who you were, your likes and dislikes, your friends and “frenemies”. Facebook is trying to prove to advertisers that it can do what TV cannot — but its video advertisements can be just as catchy and memorable.
The world’s largest social network is looking to personalised video advertising as its next major growth area. As it reports earnings on Wednesday, all eyes will be on how the company intends to grab a bigger slice of advertisers’ TV budgets — and ensure that Google’s YouTube is not the only place on the web for video.
http://www.ft.com/intl/cms/s/0/422f587c-a40c-11e4-b90d-00144feab7de.html

Analysts project that video advertising could add $700m-$1bn to Facebook’s revenue in 2015. Jason Helfstein from Oppenheimer said there was potential for even more revenue from premium video adverts, 15-second high-definition spots. Mr Helfstein estimated they could pull in $1.7bn-$3.3bn if Facebook ran one a day.
Fidji Simo, director of product at Facebook, predicts that the drive to personalisation will lead the audience for video ads to become narrower and narrower. Big brands, for example, will be able to show different videos to people who have already watched a first one.
“You can start with a broad campaign reaching a lot of the US population, like a Super Bowl campaign, and then you could see smaller audiences, and smaller audiences, more personalised messages, and refining even more,” she said.
Luxury retailer Kate Spade, for instance, recently published a Facebook video that enabled viewers to click on the products they liked and buy them.
The prize is potentially huge, with marketers increasingly turning to video ads online. Advertisers are expected to spend $7.8bn on video in the US in 2015, almost a third more than they spent in 2014, according to eMarketer, the research company.
In line with this trend, video soared on Facebook last year. There were 75 per cent more video posts per person in 2014 than the previous year, and people watched 3.6 times more video content. This was thanks in part to the success of the Ice Bucket challenge, when celebrities and ordinary Facebookers were filmed dousing themselves in water to raise money for the ALS charity.
This is not the first time Facebook has made a bid for a share of the hefty budgets advertisers spend on TV but the industry appears more receptive to the personalisation approach.
It is no secret that Facebook has been interested in going after TV advertising budgets — but I think it will happen very slowly
– Debra Aho Williamson
One advertising industry executive said that when Facebook first approached the industry about its premium video ad format a couple of years ago it made a “major miscalculation” by pricing them far too high and making the targeting just as broad as TV.
“We were used to having extraordinarily strong and detailed targeting ability, better than almost anywhere else in the media,” he said of Facebook’s existing ad offerings. “But they came out swinging with this TV alternative that cost seven figures. The message was ill-received and very few guys got on board.”
But he was positive about the newer sponsored video posts. “We can find out what they are like, their other interest, where they live, what time of day they are most responsive,” he said.
Debra Aho Williamson, an analyst at eMarketer, said brands were also keen on the potential for viral sharing on the platform, which is much easier than on YouTube.
“There are some pretty huge bumps in viral sharing when brands post ads on Facebook so if they want a huge awareness bump at the beginning of the campaign, a new product, or during the Super Bowl, it is a pretty good vehicle,” she said.
But she warned that the nascent online video industry had yet to set standards for what counts as a view of a video. Facebook charges a marketer for an impression after three seconds, whereas YouTube’s TrueView ads are paid for only after the whole ad is viewed, or at least 30 seconds if it is a longer spot.
“I think a lot of people are questioning what is the value. Does it really make an impact? Do people really notice it in that three seconds?” she said.
Moreover, e-Marketer forecasts that YouTube will still increase its share of the market to 20 per cent this year, from 18.8 per cent in 2014. It does not yet issue forecasts for Facebook’s video advertising, which the company does not break out.
TV, the centre of many marketers’ comfort zones, remains an even tougher rival. “It is no secret that Facebook has been interested in going after TV advertising budgets. Its video products are successful in driving engagement and awareness — things TV advertisers traditionally look for — but I think it will happen very slowly,” she said. “I don’t think the TV industry is flocking to Facebook.”